A Decisive 57 RallyRACC for the World Championship 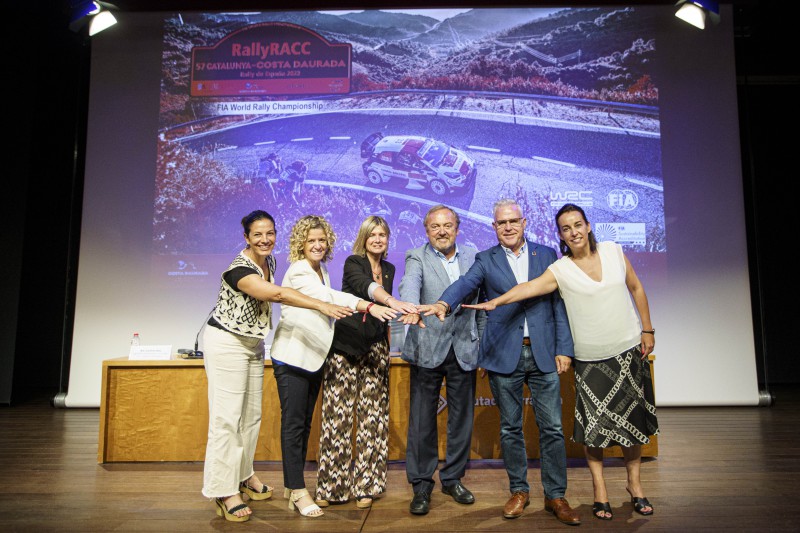 • The event will be held from 20 to 23 October with epicentre in Salou, PortAventura World and the Costa Daurada
• The itinerary will consist of 100% tarmac stages, with a completely new first Day
• Salou will once again host a special stage at the end of Saturday

Tarragona, 14 June 2022.– With four months to go, the RACC has presented the itinerary and race programme for the 57th RallyRACC Catalunya-COSTA DAURADA, Rally de España 2022, 12th round of the World Rally Championship. The first Day will be completely new and the other two will adopt changes that will allow the penultimate event of the 2022 World Championship to position itself this year, possibly, as one of the events that will decide titles in some categories.

Salou, PortAventura World and the Costa Daurada will continue to be the core of the rally, which in this 57th edition will consist of 300.01 km of speed over 19 special stages of the 1,405.03 km total route. The RACC continues to have the full complicity of the territory to continue organising the Spanish rally of the FIA World Rally Championship. In addition to the Salou Town Council, the competition has the support of the Tarragona County Council, the Tourism Board of the Costa Daurada, the Tourism Board of Salou, PortAventura World and the General Secretariat of Sports of the Catalan Government.

The location of the key points of the RallyRACC remains the same as in recent years. The start and finish podium, where the prize-giving ceremony will be held as well, will be located on Passeig Jaume I; the Service Park for all the teams will continue to be in the PortAventura World car park, and the Rally Headquarters and Media Centre in the Convention Centre of the PortAventura Business Centre.

As part of the aspects that define the current World Championship, the RallyRACC will bring together, for the first time in Spain, the new hybrid technologies that compete exclusively in the Rally1 category. Toyota, Hyundai and M-Sport Ford will bring their new mechanics with all the running-in that will have been achieved in the 11 races held before the race in Tarragona. The signs of change towards a more sustainable activity in which the world of rallying is immersed will come to Catalunya, making up a RallyRACC full of technological interest.

In addition, this year's event will also be marked by the great equality that drivers and co-drivers are showing, as has been demonstrated throughout the season. The entry will be remarkable, with the main drivers who are defining the history of the speciality in recent years, both in the overall WRC and in the WRC2 and WRC3 categories, that will include a large list of Spanish drivers.

So far this season, the victories have been shared out: 3 for Toyota (Sweden, Croatia, Portugal), 1 for Hyundai (Italy-Sardinia) and 1 for M-Sport Ford (Monte-Carlo), with all units from these manufacturers regularly fighting for podium places. The 57th RallyRACC Catalunya-COSTA DAURADA will put everyone to the test in a rally with plenty of pace, the last of the season on tarmac.

Thursday, 20 October: Shakedown
The Shakedown or test section will take place throughout the morning of Thursday, 20. For the second consecutive year it will be located in 4.31 km of Coll de la Teixeta. That same day, the 57th RallyRACC will hold its official ceremonial start at 07.00 p.m. on the podium installed on Passeig Jaume I in Salou, an outstanding epicentre as this urban area near the sea will also see the running of the last special stage of Saturday. The Service Park and the sporting hub will be based, as usual and throughout the rally, at PortAventura World.

Friday, 21 October: 1st Day - Completely new
In an edition featuring the new hybrid cars, the design of the route will leave no one indifferent, neither the drivers and their teams nor the fans. It is a loop of four special stages without service, except for two refuelling zones in La Juncosa and Flix, which will be repeated twice. Between the two loops there is a regrouping and a minimal work and tyre change area in Vimbodí, which also means an added logistical difficulty.

The four stages of this day are ‘Els Omells-Maldà' (10.66 km), Serra de la Llena (11.93 km, completely new to the rally), ‘Les Garrigues Altes' (21.44 km, stage known as La Granadella but in reverse) and ‘La Pobla-Riba-roja' (17.72 km, opposite direction of the Riba-roja stage). The 123.5 km of speed will be a tough challenge for the participants, who at the end of the day will have 45 minutes of service available in the PortAventura World Service Park.

Saturday, 22 October: 2nd very selective Day and special stage in Salou
The second day of competition will consist of another 120.25 km of speed distributed in 7 special stages, all of them known for having already taken place in 2021.

These special stages are ‘Savallà' (14.08 km), ‘Querol-Les Pobles' (20.57 km with 3 new km in the initial part) and ‘El Montmell' (24.40 km). These stages will be given two runs with two refuelling points along the route in Vila-rodona and service at the PortAventura World Service Park between the two passages.

It is worth noting that at the end of these stages the teams will once again take part in the interesting and eye-catching ‘Salou' urban special stage (2.15 km), designed as usual on the seafront promenade and the pedestrian walkways that for one day a year are used to settle the battle in a World Rally Championship event. This special stage will take place at 6 p.m., with a brief 15-minute regrouping beforehand, and at the end of the special stage, drivers and teams will have another 45 minutes for mechanical work in the Service Park.

Sunday, 23 October: 3rd stage with variations on a sprint day
The last Day of the RallyRACC is never a simple formality. In this 57th edition the rally will use familiar stages, the first of them ‘Pratdip' (11.78 km) with a 2 km extension, and the second, the well-known ‘Riudecanyes' (16.35 km). Both will be given a second run after an intermediate pass through the PortAventura World Service Park. This last special stage is well known for its popular roundabout that the cars skid around in a complete turn, thus bidding farewell to a rally that will be just a few minutes away from defining its classification.

Riudecanyes will also be the Wolf Power Stage that will award points to the top five finishers and its entire development can be followed live on the WRC promoter's television channels. Precisely because of this particularity, which requires the cars to adapt their pace to the television times, they will have a 40-minute regrouping in Mont-roig del Camp. The podium ceremony, which will take place immediately after the arrival of the cars, is scheduled to start at 1.48 p.m.

A rally that is always decisive
In its end-of-season dates, the RallyRACC Catalunya-COSTA DAURADA always tends to be decisive in some of the World Championship classifications. It is still too early to say in which challenge it may be decisive, but the large number of championships at stake makes foresee interesting sporting results at the end of the three-day rally.

In addition to scoring points for all the World Championship titles, this year the 57th RallyRACC will also be valid for four promotion championships: two are held in rallies throughout the Iberian peninsula (Peugeot and Toyota), another in Spain (Suzuki) and one strictly in Catalan events (Volant RACC-Trofeu Mavisa). These are all the championships at stake in the Rally de España 2022: