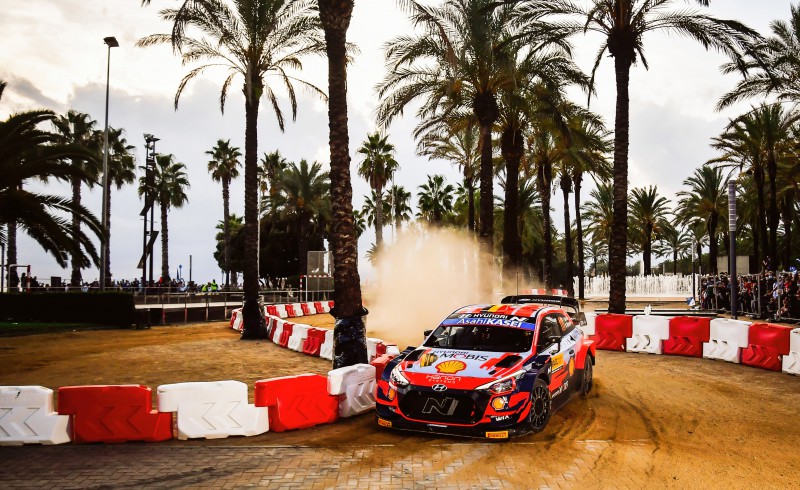 Salou, October 16th, 2021.- The second day of the 56 RallyRACC Catalunya-COSTA DAURADA, Rally de España 2021 started this morning with a total of 58 cars from the service park in PortAventura World, as the race already finished yesterday for the participants in the Peugeot Rally Cup Ibérica, Beca Rallye Team Spain and Copa Suzuki Swift.

With seven stages to go, the teams had conditions very similar to those of the first day. The Tarragona roads were in very good conditions for the first loop formed by the Savallà (14.08 km), Querol-Les Pobles (19.17 km) and El Montmell (24.40 km). A second pass through all of them and the city stage of Salou (2.24 km) would complete this second day of racing.

Thierry Neuville-Martijn Wydaeghe (Hyundai i20 Coupe WRC) did not give any chance to the others in the first three stages, as they set the fastest time in all of them and built a good advantage over Elfyn Evans-Scott Martin (Toyota Yaris WRC) in the provisional standings. The later finished nearly ten seconds behind the Belgian duo. The most positive thing of this section was the evolution of Dani Sordo-Cándido Carrera (Hyundai i20 Coupe WRC), that were slowly getting closer to the third position held by Sébastien Ogier-Julien Ingrassia (Toyota Yaris WRC).

The highlight of the second loop was that Neuville's domination, after another win at Savallà, was interrupted by Ogier, who won the Querol-Les Pobles stage –tied with Neuville– and El Montmell. The last stage, held on Passeig Jaume I in Salou brought no change, so the day finished with Neuville-Wydaeghe in the lead for the second day in a row, ahead of Evans-Martin and Ogier-Ingrassia, that increased their advantage over Sordo-Carrera, who keep the fourth place with many chances to be able to attack tomorrow to try and take the third step of the podium, as the French driver lost nearly 6 seconds of advantage in the city stage.

Nil Solans-Marc Martí (Hyundai i20 Coupe WRC)' performance was regular and positive during the whole day after making some changes to their car's setup. In WRC2, Eric Camilli-Maxime Vilmot (Citroën C3 Rally2) keep the lead while over at WRC3 Reeta Hämäläinen-Emil Lindholm (Škoda Fabia Rally2 evo) are in first place with Pepe López-Borja Rozada (Škoda Fabia Rally2 evo) in a great second place. On the other side, Jan Solans-Rodrigo Sanjuán (Citroën C3 Rally2) were forced to retire due to an off-road excursion.

The third and last day of the rally will take place tomorrow, Sunday 17, with the two classic stages of Santa Marina (9.10 km) and Riudecanyes (16.35 km) that will be run twice. The second pass through this last stage will be the Power Stage, which gives extra points to the drivers setting the top 5 times. There will be 50.90 timed kilometres out of a total of 259.74km. The day will start at 6:00am from PortAventura World and will finish at 13:44 in the parc fermé on Passeig Jaume I in Salou. After the podium, the award ceremony will start immediately.