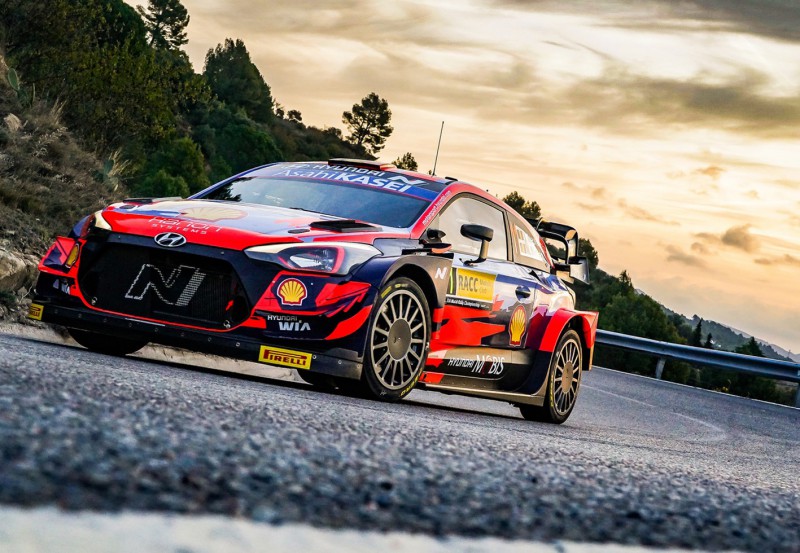 Salou, October 15th, 2021.- The 56 RallyRACC Catalunya-COSTA DAURADA, Rally de España 2021, second to last round of the FIA Rallys World Championship started today from PortAventura World. The competition consisted on two passes through the Vilaplana (20.00 km), La Granadella (21.80 km) and Riba-roja (14.21 km) stages, with 112.02 timed kilometres of the total 660.59 km of the day, the longest due to the distance between the service area and the stages.

With Sébastien Ogier, provisional leader of the championship, and Elfyn Evans fighting for the title, the Welsh driver - together with his codriver Scott Martin - was the fastest in the three morning stages with his Toyota Yaris WRC, although he tied in the second stage with the Hyundai i20 Coupe WRC driven by Thierry Neuville-Martijn Wydaeghe. That allowed him to end the loop with an advantage of nearly 8 seconds over the Belgian duo, while Sébastien Ogier-Julien Ingrassia (Toyota Yaris WRC) were in a comfortable third place more than 12'' away, followed by the Spanish team Dani Sordo-Cándido Carrera (Hyundai i20 Coupe WRC) nearly 17'' behind. The first important retirement was Takamoto Katsuta-Aaron Jonhston, who had an off in the first stage and although they could finish the stage with their Toyota Yaris WRC, they were not able to continue.

Nevertheless, in the second pass through the stages the race was turned upside down, as Thierry Neuville set the fastest time at Vilaplana and La Granadella. Afer that stage, he took the provisional lead, only 3 tenths over Elfyn Evans, who had a short off road excursion. In the previous stage, Ott Tänak-Martin Järveoja (Hyundai i20 Coupe WRC) retired due to another off. The day finished with yet another fastest time for Neuville-Wydaeghe, who ended the day as provisional leaders but with only 7 tenths over the Evans-Martin duo and 19.4'' ahead of Ogier-Ingrassia. Meanwhile, Sordo-Carrera were able to reduce the difference with the podium positions and are in fourht place, very close to the French Toyota duo.

A good day too for the debut of the Nil Solans-Marc duo, that had a couple of hicups when the windshield became fogged up during the second stage and in the third they had a spin due to the front tyres wear. Despite that, though, they finished this first day in ninth place. Over at WRC2, the leaders are Eric Camilli-Maxime Vilmot (Citroën C3 Rally2) and in WRC3 the lead is for Reeta Hämäläinen-Emil Lindholm (Skoda Fabia Rally2 Evo), with Pepe López-Borja Rozada (Skoda Fabia Rally2 Evo) in second place and Jan Solans-Rodrigo Sanjuán (Citroën C3 Rally2) in fifth.