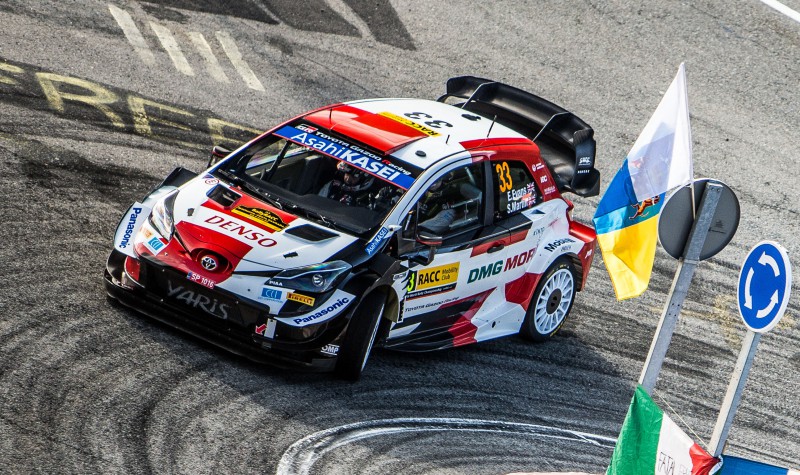 Welshman Elfyn Evans delivered a stunning performance on the opening loop of three stages of Rally Spain on Friday morning. The Toyota Yaris driver stunned his rivals to open up a lead of 7.9 seconds.

Evans laid down the gauntlet through the opening Villaplana stage with a scintillating time of 10min 16.9sec. That enabled the Welshman to surge 8.1 seconds ahead of Ogier and 5.1 in front of Neuville.

Local hero Sordo slotted into fifth but Takamoto Katsuta clouted the Armco on a tight corner and badly damaged the front left of his Yaris.

The Japanese retired with suspension damage on the road section after the stage. "Unfortunately we had a crash," said Katsuta. "I hit the barrier at the end of the stage. I misunderstood something from the pace note. Aaron read it correct but I did not understand. It was a tighter corner. Unfortunately it ended by my mistake."

Action continued with the 21.80km of the La Grandella special. Cool and cloudy conditions prevailed and Evans managed to pull a further 3.1 second clear of the World Champion despite admitting to being cautious with his notes in several places.

Neuville was applying the pressure and the Belgian tied with Evans for the stage win to consolidate his second overall, even though the Hyundai driver complained of handling issues and needing to use the handbrake a couple of times to avert disaster. Tänak made some setting changes in his i20 to alleviate under steer and then spun shortly after the stage start, as Sordo stayed behind Ogier in fourth overall.

The twisty 14.21km of the Riba-roja stage that had not been used in this format since 2012 and wound its way high above a dammed section of the Ebro River was next on the cards. Evans was again fastest and extended his lead over an under steering Neuville to 7.9 seconds.

Nil Solans survived a half-spin on his debut in a WRC car, as Sordo trailed third-placed Ogier on the midday return to Salou and Eric Camilli held a 0.4-second lead over Mads Østberg in WRC2.