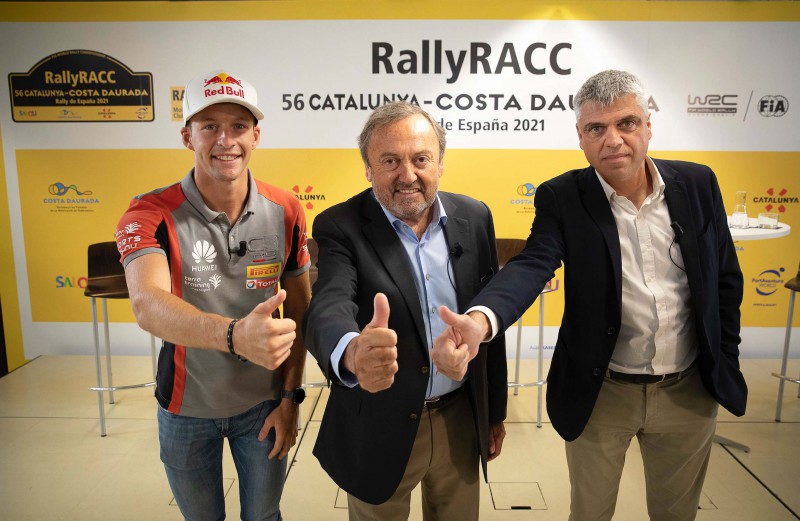 • After a year's break, the 56th RallyRACC CATALUNYA-COSTA DAURADA returns with a new configuration and new stages.
• 1,415.05 km of which 306.50 km are timed (19 special stages).
• There are two new stages in this edition: ‘La Granadella' (21.77 km) and ‘Gavadà' (13.57 km)
• Stages used in 2014 or before are recovered: ‘Vilaplana', ‘Riba-roja' and ‘Batea-Vilalba'
• The urban stage in the town of ‘Salou' will still be held (Saturday 16)
• The WRC will be located for the 16th consecutive time in the Costa Daurada, Salou and PortAventura World
• It will be the 11th and penultimate round of the FIA World Rally Championship 2021
• It is also the 5th and last rally scoring towards the FIA Junior WRC 2021
• The RallyRACC will also be counting towards three single-make championships: Peugeot Rally Cup Ibérica, Copa Suzuki Swift and Beca Rallye Team Spain Júnior

Barcelona/Tarragona, 8 July 2021.– The RACC revealed this morning the itinerary of the 56 RallyRACC CATALUNYA-COSTA DAURADA, Rally de España 2021, to be staged from 14 to 17 October, as the 11th and penultimate scoring round of the FIA World Rally Championship calendar. The Spanish round of the World Rally Championship remains faithful for the 16th time to the Costa Daurada area that hosted it for the first time in 2005, a perfect location to host a race of this magnitude, both for its extraordinary logistical and sporting qualities.

This year 2021 the RallyRACC returns to a hundred percent asphalt surface, leaving aside the mixed characteristics that were introduced from 2010 onwards. The Tarragona-based rally thus complies with the new regulations of a single type of road surface demanded by the FIA for all WRC events and does so by providing, as always, new features.

The RACC presents a race that although it returns to its configuration of years ago -entirely on asphalt-, the design changes so much that it turns into a practically new competition. An example is the shakedown or test section that will also be different to that of the last ten years, moving from the mixed stage of Salou to the winding asphalted 'Coll de La Teixeta' (4.31 km). In total, the 56 RallyRACC will have a route of 1,415.05 km of which 306.50 km will be timed, distributed into the 19 planned special stages, 10 of them different.

The two completely new stages will be of special interest due to their unique layout. ‘La Granadella', which is designed on the road from Flix to El Soleràs, has an initial part that invites you to keep a good pace, a characteristic that changes halfway through the stage when it joins a narrower and more winding road and an old-fashioned surface. As for 'Gavadà', between the village of the same name and Vandellós, it is a shorter special stage, with a low-grip asphalt and a mountain pass (Coll d'Aumet) halfway through the route. One of the interesting aspects is that the 'Salou' urban stage, which is very welcomed by the drivers and allows the fans to have a great contact with the rally, will be maintained.

The 56th RallyRACC CATALUNYA-COSTA DAURADA, Rally de España 2021, will possibly be a decisive event for the outcome of the FIA World Rally Championship, in the drivers, co-drivers and manufacturers' categories, as it could also be for the WRC2 and WRC3 championships, in all three cases as the 11th of the 12 scoring rounds. In addition to Dani Sordo-Borja Rozada, official drivers of the Hyundai Shell Mobis WRT team, a number of Spanish teams are expected to be present in other categories, the icing on the cake of a line-up that is expected to numerous and qualitative.

The Catalan event will be the fifth and closing round of the FIA Junior WRC, the single-make championship (Ford Fiesta Rally4) reserved for drivers under 30 years of age. The Catalan and Spanish representation in the RallyRACC can be boosted by the fact that it counts towards three important single-make promotion championships: Peugeot Rally Cup Ibérica (any driver with a Peugeot 208 Rally4), Copa Suzuki Swift (any driver with a Suzuki Swift Sport 1.4) and Beca Rally Team Spain Júnior (under 27 years old with any Rally4 and Rally5 car).

In addition to the Salou Town Council, the 56 RallyRACC counts also on the collaboration of the Tarragona County Council, the Tourism Board of the Costa Daurada, the Tourism Board of Salou, PortAventura World, and the General Secretariat of Sports of the Catalan Government. These entities are showing again their commitment to organising the Spanish round of the FIA World Rally Championship.

RallyRACC: 30 years in the FIA World Rally Championship
The RallyRACC reaches its 56th edition in 2021 and celebrates 30 years as a qualifying event for the FIA World Rally Championship, a real milestone. The event celebrated its 50th anniversary in 2014. In these 30 years in the championship, the Rally has been staged for 14 years in Lloret de Mar (Costa Brava) and for 16 years (this year included) in Salou (Costa Daurada) and PortAventura World.